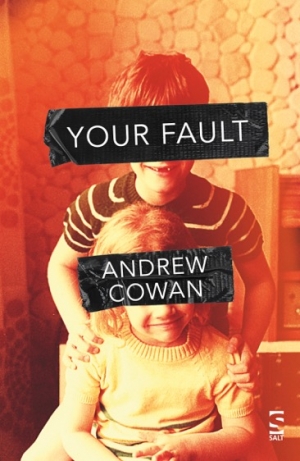 “Set in a 1960s English new town, Your Fault charts one boy’s childhood from first memory to first love. A year older in each chapter, Peter’s story is told to him by his future self as he attempts to recreate the optimism and futurism of the 1960s and to reveal how that utopianism fares as it emerges into the Seventies. It’s an untold story of British working class experience, written with extraordinary precision and tenderness.”

Buy from Amazon
Buy from Salt

'Elegant, unsparing, meticulously detailed novel in which a conscientious boy grows up with bedeviled parents. Where do men come from? They come from boys. Look again' - Margaret Atwood

'Cowan is a real craftsman. The quality of recall and, above all, the play with time, make this tightly focused book a small masterpiece' - Phil Baker, The Sunday TImes

'Your Fault is a fascinating novel in which a man looks back on his childhood with the self-awareness denied him at the time, and in which the act of remembering matters as much as the events themselves… It’s also a deadly accurate recreation of the period, making it a powerfully evocative, as well as skilfully executed, must-read' - Alastair Mabbott, The Herald

'Told over 12 chapters, each devoted to a year in the childhood of its narrator Peter, this excellent little novel summons post-war England into sharp relief... . Peter recalls a life growing up on an aspirational working-class housing estate shaped by his mother’s curious periods of absence and his father’s slow disappearance into drink. But it’s more than just a document of an averagely unhappy family, it’s a clever and moving examination of the art of memory and retrospection, and what relationship both might have with storytelling itself' - Metro Books of the Year

‘This is an exceptional work of fiction’ - Naomi Wood

‘Beautifully crafted, unsettling and vivid, this book perfectly highlights the subtleties and mysteries of everyday life, creating a world which seems ordinary even while something ominous bubbles just beneath the surface. The narrative balances between a kind of universality and an arresting specificity, exploring the relationship between memory and guilt, as it builds towards its electrifying ending’ - Emma Healey

‘Andrew Cowan’s latest novel is a brilliant guided tour of a childhood, full of his typically sharp insights into family tenderness and regret. Technically daring, emotionally rewarding, I haven’t read anything quite like it’ - Richard Beard

‘Cowan’s writing is observant and unsentimental, wryly funny and tragic, and his portrait of post-war Britain finds humour and heart in the most unlikely details’ - D. W. Wilson

'Cowan made a big splash with his coming-of-age tale Pig. His new novel, Your Fault, is just as good as that touching, insightful book... If clarity of recollection is an art, Andrew Cowan is a master' - Jane Graham, The Big Issue

'Written in the second person singular, and with a chapter devoted to each year of Peter’s life from two to 13, this is a terse, bitterly poignant novel about guilt and the art of retrospection. Older Peter tussles with his more innocent, younger self, trying to freeze-frame moments from his childhood and, in doing so, stave off a horror that is about to alter his family story for ever’ - Claire Allfree, Daily Mail

'Peter’s life is described up until, but not beyond, the point at which he is forced by tragedy to grow up and replace his father. The process by which he turns into this figure is quiet and expert. To reveal anything more would be to muffle the book’s depth charge' - Jonathan McAloon, The Irish TImes

'Cowan embraces every detail of the “buttery shades” of the Sixties with his trademark meticulousness, from the layout of the brand-new estate Peter lives on… to the rented television, the Tri-ang bricks, the ICI polyester slacks, the budgerigar (one in four British homes had one in 1966). Everything in this rented, soulless, modern house is neat and in its place, with furniture bought on HP, but his parents, especially his Maltese mother, Dolores, are not so easily controlled' - Markie Robson-Scott, The Tablet

'Cowan is the master of show not tell, leaving much to the reader to infer. His characters are sharply observed – Dolly’s frustration at being tied to a baby and a toddler is perfectly caught, Peter’s conviction that she exists only for him brilliantly conveyed. Period detail summons up the ‘60s and ’70s beautifully' - Susan Osborne, A Life In Books

‘Your Fault is a novel written under the microscope. Both unnerving and witty, it manages to embrace every little detail of childhood in the sixties. From England’s World Cup win, to pavements littered with moulding dog dirt, Matchbox replica cars and digging for worms in the flower bed. Plus, some truly tender moments, like his mother pressing a flannel to Peter’s eyes as she pours cup after cup of warm water onto his head to rinse off the bath suds, before seeing him off for his first day at school. Andrew Cowan scrutinises each of these memories in an act of extraordinary craft’ - Lee Wright, Head Stuff