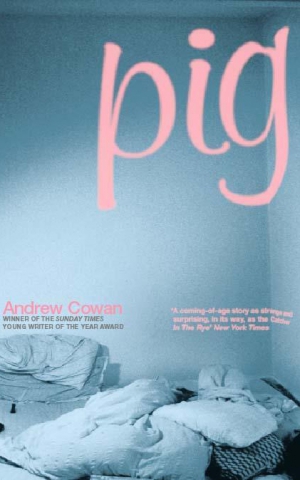 “When his grandmother dies, and his grandfather is removed to a home, fifteen-year-old Danny determines to look after their elderly pig and ramshackle garden.  Here, on the ragged edge of a blighted new town, Danny and his Indian girlfriend Surinder create a fragile haven from the enclosing world of racist neighbours and stifling families, a summer’s refuge from the precariousness of their future.  But as the summer draws to a close, the hostility and decay they tried to transcend threatens to overwhelm them.”

Buy from Amazon
Buy from Hive

'A first novel of extraordinary poise and accomplishment, treating a boy's coming of age amid the squalid realities of the new British underclass with a delicacy and lyricism which is both gripping and moving' - Michael Dibdin

'The author's dispassionate gaze carries with it great compassion... a coming-of-age story as strange and surprising, in its way, as 'The Catcher in the Rye'' - James Saynor, New York Times Book Review

'The detail is immaculately recorded; the effect is heartbreaking' - Louisa Young, The Sunday Times

'It has all the elements we look for in a good story: a heart-wrenching understanding of little tragedies and a nose for the least expected hiding places of love' - Maureen Freely, Options

'In sentence upon sentence of finely honed prose, Scottish-born Andrew Cowan meticulously creates a richly textured, thickly detailed portrait of a sensitive young man trying to salvage something of value from the fragments of a shattered world... a sterling example of novelistic realism' - Merle Rubin, Los Angeles Times

'Danny's relationship with Surinder is delicately observed in its tenderness, as is the stubbornness and wisdom of adolescence. This is a wholly satisfying book, quietly beautiful and inescapably ominous' - David Buckley, Observer

'A beautifully told account of a teenager's first love...' - Company

'Polished and entrancing' - Scotland on Sunday

'... could not be bettered for sensitive authenticity' - Nicholas Tucker, The Tablet

'Honest, charming and extremely moving, it is a real treat' - Rachel Thomson, Tribune

'Deliberate, economical, powerful... it's a novel by a real writer' - Wally Hammond, Time Out

'The shortlist that we had to make could have been much longer. Two that we especially regretted having to miss out were Candia McWilliam’s Debatable Land and Andrew Cowan’s Pig, a short first novel of great charm and promise' - John Bayley, Chairman of the Booker judges, The Times

'... a poignant, bitter-sweet meditation on the traumas, delights and absurdities of growing up' - Paul Sussman, Independent on Sunday

'Beautiful in its drawing of character and detail, this is a must' - Eastern Daily Press

'... as Cowan's sure hand develops the story, he creates both poignancy and depth of meaning, making Pig a profoundly moving debut novel that doesn't read like a debut novel at all' - David Weigand, San Francisco Chronicle